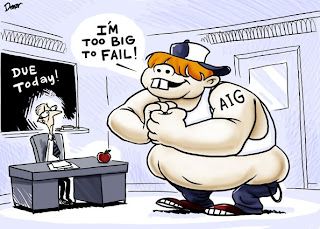 Posted By C. Brown
Everyone might know of a company named AIG, since they have been in the news for quite sometime now. They are known for taking bailout money and then giving their employees (executives-people in management role positions) over $165,ooo,ooo in cash as bonuses. To some this isn't anything to worry about or to even talk about. To many others, this is a huge deal. The U.S. government gave AIG over $85 billion in bailout money, and for what? Our model in the U.S. is that "you are too big of a company to fail", so guess what that means, everyone has to pitch in and help these companies that end up taking too many risks and bail them out with no consequences. Now since there has been so much controversy over AIG giving $165,000,000 to their employees, 15 out of the 20 employees that received bonuses have decided to give the bonuses back to the company. I think everyone knows that these employees were pretty much pressured/forced to give the money back in someway, because if they wanted to give the money back, we wouldn't be talking about the situation. Not only is AIG trying to keep the company afloat and keep the company alive and well, they are also fighting battles with the IRS over tax benefits and credits. AIG has been using complex transactions to save customers and themselves a lot of money in tax not only here in the U.S. but overseas. AIG is under a lot of scrutiny, and I believe that there is a lot more of it to come in the next year. Either 2 things are going to happen. 1: AIG is going to turn the company around and start turning a profit, everything is legal and no playing countries tax regulations against one another. 2: we are going to find out a lot more about AIG that we didn't know, we are going to question why we ever gave them bailout money, and they are soon going to fail or seek new leadership.