Affordable or Not Affordable - That is the Question 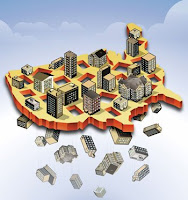 NEW YORK (CNNMoney.com) -- Crashing home prices have led to the most affordable housing market in at least five years, according to the National Association of Home Builders/Wells Fargo Housing Opportunity Index released Thursday.

More than 60% of all U.S. homes sold during the last three months of 2008 were affordable - meaning that a family making the national median of $61,500 a year would pay 28% or less of their total income toward housing expenses.

Topping the list of most affordable U.S. metro areas, which ranks areas with more than 500,000 in population, was Indianapolis. This is the city's 14th consecutive quarter in first place; it boasts a full 93% of all homes sold being affordable to median family households.