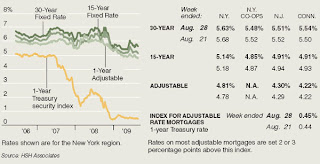 Posted By Pete Hill
A recent study suggests that most homeowners have qualms about abandoning a mortgage that they can afford to pay, even if it straps them to an investment that’s unlikely to pay off anytime soon.
But if the house has lost significant value, or if many neighbors walk away from their mortgages, the study says, “strategic defaults” are significantly more likely.
It is an increasingly common question facing homeowners, many of whom have seen their properties lose large amounts of equity in recent years: would you give up a home that is considered to be “underwater” even if you could still afford the monthly payments?
A new idea to help homeowners is to offer them the option, that you could give up 1% of your homes value and not have to worry about losing more.
That is the essence of a product introduced this month by Working Equity Inc., a San Francisco company recently started by former financial services executives.
Industry analysts and financial consultants suggest that the product could be useful to homeowners but should be approached with caution.

Rules put in place in late 2008 by Fannie Mae and similar rules adopted by Freddie Mac are less favorable to borrowers who put down 20 percent to 25 percent, considered to be the industry minimum.

For most people, it turns out, smaller down payments result in lower interest rates. Whether that benefits borrowers in the long term, though, is open to debate.