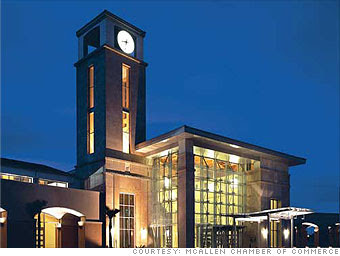 
NEW YORK (CNNMoney.com) -- While foreclosure rates are easing in some of the hardest-hit cities, the crisis is beginning to expand into new metro areas.

On Wednesday, RealtyTrac released its list of cities with the biggest foreclosure problems during the third quarter. As expected, towns in California, Florida and Nevada dominated the top 10, with Las Vegas taking the top spot with a rate of 1 in 20 homes. That's a 53% increase over the third quarter 2008.

But there was a bright spot: Half of the cities in the top 10 showed year-over-year declines in their foreclosure rates, and 60% showed improvement compared with the second quarter.

For example, second place Merced, Calif., saw foreclosures fall by 11% from last year and 13% from last quarter, to 1 out of every 27 homes. And Stockton, Calif., slipped to No. 4 from No. 2 last quarter. The city, which is 80 miles east of San Francisco, had ranked highest for all of 2008.

"We're not sure if that will be a one-time thing or a true continued trend, but it's one of the first positive signs we've seen," said Rick Sharga, a senior vice president at RealtyTrac.