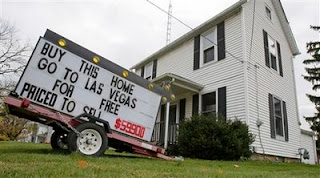 WASHINGTON – After a slow start, the Obama administration's mortgage relief program has reached one in five eligible homeowners, a government report says.

As of the end of October, more than 650,000 borrowers, or 20 percent of those eligible, have signed up for trials lasting up to five months, the Treasury Department said Tuesday. The modifications reduce monthly payments to more affordable levels.

Launched with great fanfare in March, the plan got off to a weak start, but now nearly 920,000 loan modification offers have been sent to more than 3.2 million eligible homeowners. That works out to 29 percent, up from 15 percent at the end of July.

In California, about 130,000 homeowners have been enrolled in the "Making Home Affordable" loan modification plan, which President Barack Obama unveiled in February. That works out to about 19 percent of the state's homeowners who were either two payments behind or in foreclosure at the end of last month, according to Treasury Department data.

"We are reaching all the places that really got decimated," said Michael Barr, an assistant Treasury secretary. "The other basic story is we're reaching borrowers at a scale that has not been done by any other modification program."

Two other hard-hit states, Arizona and Nevada had similar rates of assistance as California, at 22 percent and 18 percent respectively. Florida, however, was much lower, at 12 percent, possibly because of high numbers of investor-owned properties that don't qualify for the program.

To continue reading more on this topic click here