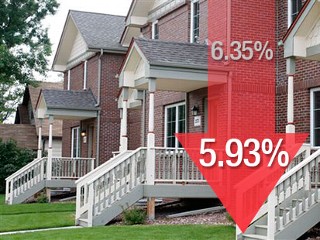 Freddie Mac, one of the nation’s largest mortgage companies, reported that average rates on 15- year and 30-year fixed rate mortgage (FRM) dropped after rising a week earlier. The average rate on a 30-year FRM fell to 4.82 percent from an average of 4.87 percent last week, whereas the average rate was 5.88 percent a year ago. The average rate on 15-year FRM decreased to 4.48 percent from 4.54 percent last week. But a year ago, the rates averaged 5.40 percent. Rates on 5-year adjustable rate mortgages averaged to 4.88 percent, down from 4.93 percent, and rates on 1-year adjustable rate mortgages increased to 4.91 percent from 4.83 percent. And, rates have been under 5 percent for five consecutive weeks.

The lowest rate was 4.78 percent on the week of April 2, according to Freddie Mac’s survey since 1971. Low rates have attracted borrowers, with nearly 80 percent of new home loan applications, to refinance. Fannie Mae, which is the sibling company of Freddie Mac, reported that it refinanced $77 billion last month, the best month of refinancing since 2003. "The housing industry is starting to exhibit some positive signs," Frank Nothaft, Freddie Mac's chief economist, said in a statement but noted they were "scarce and too early to tell how permanent."
To be qualified for a loan, borrowers would have to have solid credit, because “lenders have tightened their standards dramatically over the past year (San Francisco Chronicle).” Otherwise, they would not get the best rates.