What are Subprime Mortgages? 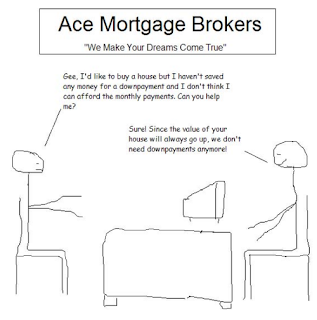 Subprime mortgages are loans given to individuals with bad credit. For the first couple of years, the interest rates will be low but after that, the interest rate gets raised to a higher percentage. Financial institutions began to use these subprime mortgage loans as financial products and manipulated its value to convince investors to invest it in their pension funds and hedge funds.

The financial product compiled of subprime mortgage loans follow the idea of asset-backed securities. The way it works is that home mortgages were grouped together into one package that collects individual mortgage payments. The money will used to pay investors a coupon on the investment. This creates asset-backed securities with the homes that individual own being collateral. Credit rating agencies gave these securities 'AAA' and 'A+’ ratings, informing investors that it is safe to invest in these asset-backed securities. This became so profitable that mortgage lenders began to overlook basic qualifications for mortgages such as proof of income and down payment. The fact that the real estate market was booming only encouraged this to frequently occur because the value of real estate was increasing at a rapid rate.

As the value of the homes kept going up, the average American’s income stayed the same therefore it became too expensive for them to afford the high prices. This led to people defaulting on their mortgage payments. As more people default on their mortgage payments, it increased the supply of available houses on the market. The over supply and under demand of housing caused housing prices to drop.

Foreclosures increased because the mortgages were pooled together into securities, sold and resold to investors. It became difficult to find out who owned the mortgages so it was difficult to prevent the foreclosures from occurring. As a result, banks were unable to work with individuals to derive at a method for them to pay back the loans.